This year is starting with some heart-warming program I’d like to invite you to.

After the well-received performance Subjects of Position, a piece of Zwoisy Mears-Clarke presented in the first days of January at Tanztage Berlin, Sophiensaele, I have the pleasure to invite you to the following highlights I collaborate in:

Next week already there is Sounddance encounters in Dock11, a project of Jenny Haack I am so eager to support. The performances are 1-4th of February, each evening a different double or triple bill.

In the beginning of March Abandon Human will be played in Dock11, 3rd and 4th of March. This is a heart to heart Project with Katie Duck and Sharon Smith, a rock show about being a woman.

Over time the soundtrack of Stranger has been released by Gabor Csongradi, and the kind supporters of our Indiegogo campaign could receive their digital copies. One song can be listened to here.

Last, but not least, Stranger spoiler is out there, a short summary of what has been cooking on stage last February. You are very welcome to see it!

Sounddance Festival is rapidly approaching! I am glad to invite you to Dock 11, where a nice collection of Berlin-based artists are going to show their recent works that relate to or are instant composition works. The festival organised by Jenny Haack will take place from the 20th of July. Both weeks there will be different performances each night, Thursday through Sunday. I am doing the technical direction of the festival and will be the lighting designer and technician for some of the performances too, alongside with Aurora Rodriguez and Asier Solana.

Another good news for performing artists: the dates of the next workshop ‘Performing Space’ has clarified!

The workshop will be October 2-6, each day between 14-17h at Studio Laborgras in Kreuzberg.

I am excited to invite you to my new performance, Stranger. It will take place 23-26th of February at Dock11 theater. If you want to see the participants, check out the indiegogo campaign we have launched!

In the meantime the trailer is out here.

Please find more information and ticket reservation on the corresponding link of Dock11.

Another series of events not to be missed in early April are a workshop with Katie Duck, and the performance together with Sharon Smith too.

Shortly before that I will be lighting Jenny Haack’s project, ‘Jitter-fragile-minor’.

Just the week after ‘Abandon Human’ with Katie Duck and Sharon Smith, I will light Julyen Hamilton and Barre Philips’ performance,  ‘The duo now’.

This five-days practical workshop provides a tool to deal with the multimedia aspect of dance and movement theatre conceptually, and in realisation of a piece. During the week, the performing space will be examined through creative movement tasks, with special attention to how many ways the use of light and music can be invested to the advantage of a creation of set or improvisative performances. The compositional focus of the work makes the deep analysis of the architectural, sonic and emotional aspects of space possible. The awareness from this study can be then applied in one’s own performing practices.
The workshop closes with an informal showing at Studio laborgras. 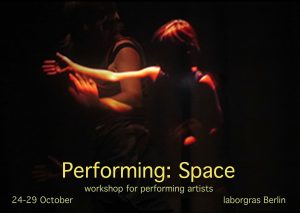 Dear Visitor, make the best of your summer! From Tuesday the 28th June until 10th of July Gangplank meeting in Rijeka with Bruno Pocheron and myself. This is a meeting for technicians, designers, and performing artists, and in-depth participative research about show control and inter-media communication in staged arts and installation. Should you be interested, get in touch!

Do not miss the Impro Xchange festival at Dock11 Berlin, 15-26 of July 2016. I am happy to be doing lights for the series of events.

And last but by far not least, Come and see Julyen Hamilton and his group, Allen’s Line with the performance ‘Mud like gold’ 28-31th of July at Dock11 Berlin!

Upcoming:  Performing Space 2 (a six days workshop on using the resonant space as a nurturing ground for improvisation and set performances) 24-29 October 2016 LaborGras Berlin, By Gabor Csongradi and myself. Save the afternoons, more information will follow.